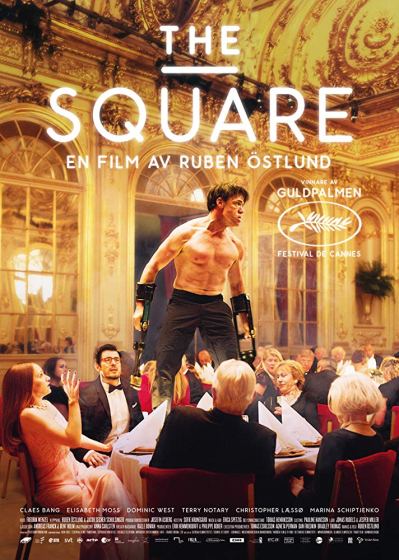 A review on “The Square”, directed by Ruben Östlund, 2017

“How much suffering can one impose upon those now living for the sake of those who will follow? And can we be sure that those who follow will be any better off?”

Where do we draw the line between personal responsibility and self-sacrifice? In the time of the triumph of pleasure over contentment and prosperity over happiness, making this distinction is harder than ever, if you bother to bear the concern. It is true that all these abstract concepts are merely figments of our imagination, but no one could argue with the fact that a distinct line would resonate with one’s cognitive characteristics and respond to their psychological needs. The needs which, if not satisfied, could lead to a destructive split of personality and the distress it consequently brings about. Christian takes his daughters to the X-Royal museum for a private excursion and some quality time. At the entrance of one of the new exhibitions, Östlund presents us with the main theme of his work. The children have to choose between the two passageways; the arrow to the left says: “I mistrust people.” and on the arrow to the right we read: “I trust people.” “The Square” is a journey for Christian from the former to the latter.

The story of The Square revolves around Christian, the eminent curator of the X-Royal museum of Stockholm. He is preparing to host a new exhibition when a bunch of con artists on the street manage to put up a show and rob him of his mobile and his wallet. Through the film, we come to observe that Christian has a very reserved personality, like a wild deer, easily startled and born to run, not to fight. It is after one and a half hours into the movie that we realize he has two daughters, most probably an indicative of a broken marriage, about which we don’t get any further information whatsoever. The robbery breaks Christian’s equilibrium in favour of “I mistrust people.” The Square is a quest for Christian to restore the equilibrium. Meanwhile, he’s fighting on three fronts: hosting a controversial exhibition at the museum, the aftermath of his bland and awkward fling with the American reporter, Anne, and his clumsy affair to retrieve his stolen belongings. The occurrences in these three sub-narratives hand in hand bring the protagonist to the point of growth.

“The square is a sanctuary of trust and caring. Within its boundaries, we all share equal rights and obligations.” This sounds like a sanctuary for Christian, for it encompasses the very issues he’s struggling with; overcoming his trust issues and defining the extent of one’s personal responsibility towards the society. After Christian records his apologetic message to the boy, who he had wrongfully accused for stealing and caused him trouble with his parents, he goes on: “…these problems (social inequality) can’t be solved by individuals alone. Society needs to lend a hand too. It’s not enough that I admit I was wrong and apologize to you in a video. There are bigger, structural problems involved that society needs to deal with.” Personal responsibility, as an inborn duty of every individual as building blocks of a modern society, as opposed to self-sacrifice, which is always commendable due to going beyond what’s expected from one, and trust versus mistrust are not the only dualities contemplated in the deeper layers of The Square. The director also tries his chance on the thin ice of classic and modern art, and briefly dwells on freedom of speech versus political correctness.

Many have seen the square as a satire on the modern art. However, this judgement sounds a bit far-fetched if we remember one of the first dialogues of the film. Christian, after a long night of partying, sits for an interview with Anne. It’s here when he accents the subjectivity of the concept of art, by defining and clarifying the duality of exhibition and non-exhibition. “If we took your bag and placed it here, would that make it art?” And this argument proceeds to reach “the crowded moment of mega exhibition” If we believed every man-made object is a work of art, why couldn’t the man himself be worthy of this distinction? Isn’t “Square” itself an exhibition in which a man has been put on display? The modern art is a fight for the artist, a relentless battle for the creator. Every work in classic art is an inspiration, with a clear-cut answer for every question and an impregnable belief system. Modern art, on the other hand, presents its audience with a puzzle, and instead of providing them with an answer, hits them in the face with yet another question by provoking them to think. We have a juxtaposition at the beginning of the film; the exhibition of piles of gravel in the museum and the disgraceful removal of an old statue of Karl XIV[i] from the courtyard. On the toppled statue it reads: “The love of the people is my reward.” For the modern man that’s just an empty sentiment and definitely not a good enough answer to his concerns. A four-in-four square is to replace it.

Julian (Dominic West), who’s obviously based on Julian Schnabel[ii], is being interviewed about his new exhibition at the museum. Among the audience, someone keeps interrupting them by yelling out obscene words. It transpires that the man is suffering Tourette, a nervous system disorder involving involuntary and repetitive movements or sounds. When someone finally explains it to the audience, everyone accepts the situation and moves on. Östlund creates the same situation in another scene where Christian and his colleagues are discussing the new exhibition with the two young publicists. No one seems to mind the baby’s disruptive noise. Julian’s exhibition, piles of gravel and huge empty spaces, is clearly reminiscent of Classical Zen gardens, created first at temples of Zen Buddhism. They were intended to imitate the intimate essence of nature, not its actual appearance [iii], which sounds more like a manifest for minimalism. An unconditional acceptance of life and what it brings might be the best-known motto of Buddhism. Human beings might bring themselves to accept the actions and deeds of the nature, animals, babies and people with proven disabilities, but when it comes to their peers, they see only two ways before them; fight or run. This intolerance is originated from our expectations, which yet again is another cause for unhappiness according to Buddhism.

“Welcome to the jungle. Soon you will be confronted with a wild animal… if you try to escape, the animal will hunt you down. But if you remain perfectly still, the animal might not notice you.” This brings us to the magnificent “monkey performance” by Oleg Rogozjin (Terry Notary), a powerful spectacle which was inspired by the real-life Ukrainian artist, Oleg Kulik. Kulik’s was however a biting dog performance. The monkey enters the room filled with affluent and elegant financial contributors to the museum in a glamorous setting, a truly grotesque contrast. The animal goes straight to Julian, which could be construed as a mockery of the modern art. But it could also mean the opposite. The two modern artists are in cahoots to set the scene and build the atmosphere for what comes later.

Anne is pictured as a naïve and not-so-intelligent woman who never realizes that she had been Christian’s third choice at that night, after the girl on his lap leaves and another one ignores his sloppy flirtation. Anne’s approaches to him after that night only makes her look more miserable than she already is. But her presence helps us witness a fierce act of Christian’s mistrust through his perverse resistance to let the condom go. Anne comes to the museum to confront Christian a few days later. “I think you are interested in using your position to attract women and to make conquests.” Anne is not a good judge of character either. Christian doesn’t enjoy sex, and him going from one woman to another does not qualify for being called conquests. It’s more of a defense mechanism to avoid confrontation with his fundamental challenges. But this strategy of his has started to backfire. He can’t run forever. His mistrust in people is facing him with consequences from which there is no escape. It’s late at night. Christian arrives home with his two sleepy daughters, not knowing that the young boy is there to “make a chaos” with him. Christian gets upset and inadvertently shoves the boy down the stairs, into the darkness. This unprecedented act of violence shakes him to his core. He goes back home. Enough is enough. He needs to face his daemons. He goes back down, dives into the garbage bins, looking for the boy’s phone number. Christian in the middle of the pile of garbage, and under a pouring rain in a top shot in a spectacular way resembles the famous shot of the same type in “Shawshank Redemption” when Andy (Tim Robbins) makes his escape from the prison. This is Christian’s redemption. This is the moment of growth. He finds the boy’s number and calls him: “The person you are trying to reach is not available.” The boy’s job is done, and he is thrown into the shadows. Christian’s video message, which will never reach the intended recipient, is a dialogue with himself, a contemplation on how to implement and consolidate the new order. He soon needs to be ready for his press conference.

Pedro Almodóvar, the head of the jury who gave Östlund the Palme d’Or, cited the film for depicting “the dictatorship of being politically correct. “…That is terrible and awful and more horrifying than any other dictatorship,”[iv] Christian’s catharsis first manifests itself in his resignation. He never apologizes for the content of the video, for he’s not responsible for it. He is stepping down not because of the dictatorship of politically correctness. He’s doing it because he simply hasn’t done his job. One of the reporters at the conference shares Almodóvar’s concern with Christian. He happens to have a response for that: “I made a mistake. The clip was published without my approval. This has nothing to do with my own opinions. We’re talking about the museum and my professional role. What is it you don’t understand about that?” After the clip went viral, when Christian first meets with Elna (the lady with the cute dog), he vehemently persists in his belief in freedom of speech: “this is my conviction.” and when asked to comply with any probable outcome of the board meeting on the issue, he refuses to make any promises. Resignation is his own decision. This is where the new Christian draws the line.

“There are socialist, capitalist, monarchical, democratic, anarchist, feminist, patriarchal, egalitarian, hierarchical, left-wing, right-wing, reformist, racist, free love, nuclear family, and many more utopias. Utopia has an inherent contradictory nature.”[v] When it comes to symbolization, a square could have countless interpretations, but what all those have in common is the notion of an order introduced or imposed by man. Burrhus F. Skinner, American celebrated psychologist, in his novel, Walden Two, has introduced the author’s own idea of a utopia. The nature of this utopia is of no consequence compared to the way he implements it. He starts with a microcosm and volunteers. The illuminated rectangular shape in the museum’s courtyard is the artist’s idea of utopia, all the sixteen square metres of it. The only thing you need to bring is trust.

[i] The king of Sweden and Norway during the nineteenth century