The Agony of Choice 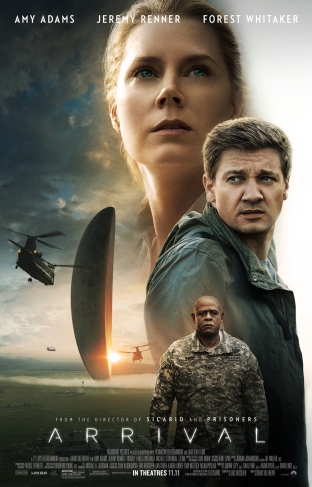 A Note on “Arrival”, 2016, directed by Denis Villeneuve

“The distinction between the past, present and future is only a stubbornly persistent illusion.”

It was some 200,000 years ago, when we first managed to use our vocal cords as humans to produce meaningful words. Man started putting a name to whatever his five senses could perceive. Now a walk from the cave to the river to catch some fish was much easier to plan and organize. But it took us 50 more millennia to go beyond the realm of senses, to the emergence of Subjective Reality and the advent of Fictive language. For an idea, what matters most is to be communicated. And by the time of the cognitive revolution, around 70,000 years ago, humans had had enough time to adapt to verbal language as the prime means of communication. So, let there be words! The dualities of Good and Evil, right and wrong, kindness and cruelty, and a myriad of other concepts originated and erupted from this newfound consciousness. We had just begun to discover how our peers saw the world and made sense of it. The first Whys were asked and consequently, the first explorers were born. But apparently, the ideas were still too crude to be worth recording, except for some doodles on some caves’ walls. Whether it was the lack of stationery or an absence of desire or need, it took us tens of thousands of more years to start writing. Some five thousand years ago, the first grooves were carved onto the hard disk of our collective consciousness. Now we could accumulate knowledge for posterity, a giant leap of mankind to becoming one. But did we take a wrong turn? Did we have to tether what we write to what we say? Sound waves are bound to the laws of physics. And in almost every equation of physics, we can’t help but notice a small “t”, signifying Time. We simply cannot understand things without associating them with a sequence of events. Without the concept of time, we lose touch with reality. The succession of events is what gives them meaning. Even imagining a reality without time is inconceivable to our species by nature, so it takes the mind of a genius to lay down a narrative that successfully probes into this convoluted conundrum, a task well executed by the almost immaculate narrative in Arrival.

The wait is over. Aliens have finally come to meet us on earth. They have arrived in twelve bean shape crafts, scattered around the globe. We are not yet aware of their purpose of making such a humanly impossible trip, and they speak in a language we – quite predictably – don’t understand. Louise and Ian, a linguist and a scientist, start working round the clock, leading a team of experts to decipher their language, which is fundamentally different from any human language. “There’s no correlation between what a heptapod says and what a heptapod writes. Unlike all written human languages, their writing is semasiographic. It conveys meaning, it doesn’t represent sound. Perhaps they view our form of writing as a waste of opportunity, passing up a second communication channel. Unlike speech, a logogram is free of time.” Humans are not wholly unfamiliar with the concept of timeless symbols, sometimes called the archetypes, a term coined by C.G. Jung. However, we encounter them mostly in our dreams and we communicate them on an unconscious basis or through art. Our literature teems with archetypal symbolism, but we still use words to describe them and don’t have a collective and exhaustive comprehension of what they represent without the use of speech. One of the criteria there is for evaluating a work of art is accounting for all the texts it has produced. Although text, in this context, does not necessarily mean written words, we understand art through interpretation and critique. We, collectively as a species, have lost, or never had, an immediate and conscious contact with our timeless symbols.

The aliens’ spaceships look nothing like we’d have presumed. It’s in a shape that could easily be found in nature. However, the channel through which they receive humans is square, the archetype of earth, as opposed to the circle, the archetype of heaven. The dividing screen is rectangular, signifying limitation and constraints. The aliens send a cylindrical pod to bring Louise to meet with them for a last time. Now, she’s different, with a transcended consciousness, and naturally, with a much heavier burden of responsibility, doomed to live her life with the constant agony of choice! “If you could see your whole life from start to finish, would you change things?” A confused Louise asks Ian. Arrival is not just another time travel story. Louise doesn’t go back and forth in time. It seems as if she’s standing outside time and looking in, seeing all the possibilities of her life, all at once. For the sake of analogy, if we envisage time as a donut shape tube, where we are now is directly dependent on the last decision we’ve made in our life. Since we cannot foretell the results of our decisions, the territory of our free will is confined to the choices we have at each cross section of this tube. Now Louise has a much freer will, which is more of a curse than a blessing, considering the inherent limitations of flesh and blood. We all have experienced the despair of the moment we want to scream when having a nightmare but cannot utter the faintest sound! Dreams are outside the jurisdiction of physics and matter, where we roam free of the mandate of space and time. For Louise Banks, the two worlds have collided, and this epiphany is no easy task to be conveyed. The idea of life as a circle, is reminiscent of Nietzsche’s philosophical hypothesis of Eternal Return. “This life as you now live it and have lived it, you will have to live once more and innumerable times more; and there will be nothing new in it, but every pain and every joy and every thought and sigh and everything unutterably small or great in your life will have to return to you, all in the same succession and sequence”.[i] Nietzsche, unlike Louise, was not standing outside time, yet he was horrified by this terrible prospect. “If every second of our lives recurs an infinite number of times, we are nailed to eternity as Jesus Christ was nailed to the cross. In the world of eternal return the weight of unbearable responsibility lies heavy on every move we make. That is why Nietzsche called the idea of eternal return the heaviest of burdens (das schwerste Gewicht).”[ii] Albert Camus’ “The Myth of Sisyphus” is inspired by the idea of Eternal Return. Sisyphus is condemned by the gods for eternity to roll a boulder up a hill only to have it roll down over and over again, an artistic manifesto on the absurdity and the repetitive nature of existence.

The aliens release some ink-like material to produce written words on the dividing screen. In the twelve sites around the world, scientists and linguists from different nationalities are hard at work to translate these circular time-free logograms, and they’re making progress. But a legitimate question has been raised: why wouldn’t the aliens deliver the message all in one place? The messages they are trying to convey in the twelve sites are to be superimposed to form a whole picture. Translating the alien’s language demands all humanity work together as one. Louise tries to give a simplified explanation to a persistent and frustrated Colonel Weber (Forest Whitaker): “we need to clarify the difference between a specific ‘you’ and a collective ‘you’, because we don’t want to know why Joe Alien is here, we want to know why they all landed.” The idea of Oneness of the universe abounds in the history of philosophy. Hegel, as a prominent and fairly recent great thinker, “held that nothing is ultimately and completely real except the whole, of the sort we should call an organism. The whole, in all its complexity, is called by Hegel ‘the Absolute’. The Whole, considered as a unity, is alone real. The truth is the whole and nothing partial is quite true, and time is merely an illusion generated by our inability to see the Whole.”[iii] The alien language brings the humanity together, the first leg of an odyssey, an eternal journey to becoming One with the Whole. However, simply by learning a language, one wouldn’t be able to make their way into its cognitive characteristics, for this is the work of another archetype: “the linguist”.

Dealing with greatly complex issues, like that of Arrival, is a double-edged blade for the one who tells the story. On one hand it’s an uncharted territory, about which we know nothing but heaps of hypotheses, and conjectures, yielded by induction. The creator has a wider playground to apply his own rules and define his own reality. On the other hand, the story needs to be comprehensible to the extent that the audience at least get a vague notion of the idea which is being presented to them. Arrival transcends a sci-fi story to a philosophical argument for unity. Around the end of the film, we see Louise in her beach house, standing in a dark room, looking out through a broad window to a dark bluish landscape, closely resembling the dividing screen at the alien’s ship. Behind the window, two trees have slashed the view, like a re-enactment of Louise’s confrontation with Abbott and Costello. Alienation in psychology is defined as withdrawal and isolation from surrounding environment. By this definition, it looks as if We are the aliens, not the ones who have come a long way through the stars to tell us about it.